Subscribe to The Womanly Art of Femininity via Email

And I must say, it really is a question.  Here’s why.

I love bacon, but now that I have become a foodie–meaning I “eat clean” as often as possible–one of the first things to go was, literally, bacon.  I learned that bacon is one of the worst things on the planet for me to ingest–mostly because of the salt, sugar, and nitrites content.  And since I have this knowledge, of course, bacon is now the last thing on the planet I want to ingest. 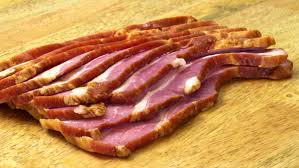 Well, that lasted for a few weeks until I realized that I can get nitrite-free, low-sodium bacon, but the nasty, delicious stuff is still loaded with sugar and chemicals.  Oh well.

So the problem still exists; namely, how do I get through making Sunday breakfast without the stuff?  I don’t.

I have to make it, and so I do, for my husband and son.

So why does this even matter?

It matters because it took me, literally, years to get over the fact that just because a food item may not be perfectly up to my snuffle-upagus standards, that doesn’t mean I cannot serve it to my family if they’d like it.

Denying our family their favorite delicious foods, even the unhealthy ones, is something that can be a real cause for contention.  One husband literally left his wife because he was so completely irritated that she wouldn’t prepare or serve him the kind of meals he wanted–with cold cuts, you know, the other meats that are loaded with sugar, salt, and nitrites; thankfully she won him back with her feminine wisdom.

Ladies, we will keep a much happier home if we prepare and serve the kinds of foods our husbands enjoy.  If we can make some unnoticeable substitutions such as including some brown rice, fine.  But to make an issue of it is a huge mistake and can, again, be a valid cause for contention.

So, to bacon or not to bacon, is that the question? Then I say the answer is: to bacon!

A great cookbook for whole-foods cooking!  (But please be sure your hubby is willing to “go whole.”  If not, please don’t make an issue of it, better to make two separate versions–one for yourself and one for him and the children–to keep the peace.  If you show delight in what you’re eating, and do not pressure anyone else in the house to go along, then eventually–like maybe years later–you will certainly see the rest of the family interested in whole foods too.